I don’t know where it all began, our family love for acting, but it certainly seems to run in our genetic code.  The above picture is of my grandmother dressed in buckskin as Pocohontas.  She was one of six daughters, all of whom loved to dress up and act out. It was their form of family entertainment and it has been a trait passed down through the generations. 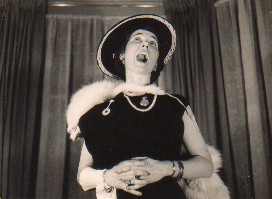 My mother, was just as quick to get into costume as her mother and aunts.  She is dressed as an operatic diva in the photo above.  She spent her school years dancing and singing.  She took part in many Gilbert and Sullivan operettas and was once offered the chance to go to Julliard, but she turned it down because she knew she would be terribly homesick for Newfoundland.  Mom had a lovely melodic soprano voice and I loved hearing her sing the hymns in church.  She had a great sense of humour and loved to laugh.

My husband and I are hams at heart.  This photo was taken at a friend’s home where we went in costume for a murder mystery dinner.  I’m dressed as a flapper and he is a 1920’s slick con-man. We have always enjoyed going to the theatre and acting up any chance we get.  I took an acting course in high school from OLT director, Joe O’Brien, and enjoyed every minute.  In my senior year of high school, I took part in a play called “Coffee House” where I played a pregnant teenager trying to muster up enough courage to tell her parents. It was well received and I was hooked.   Part of the reason I later liked teaching so much was because I got an opportunity to have an audience every day (children are very appreciative).  My friend, Ivah Malkin and I began a community little theatre group called the Fencepost Players when our children were young.  We did two productions a year and it continued for five years.  Our efforts were rewarded with a certificate of merit awarded to community volunteers by the Canadian government during the torch run for the Olympic Games in 1988.  I still use drama whenever it is appropriate in the church.

When our children were young they spent time making up radio shows on our eight track tape recorder and performing plays with their cousins for the family.

Now our youngest son, Brenhan McKibben, is an actor who has performed on stage both in amateur and professional productions.  He got his college diploma in Theatre Arts from Algonquin College and appeared in four Tara Player plays, a professional GCTC production, and on the Fourth Stage at the National Arts Centre. He also had a part in the Gladstone Theatre production of “The Lieutenant of Innishmore”.  He is a member of  the Red One Theatre Collective in Toronto and has appeared in “Zoo Story” by Edward Albee, “Howie , the Rookie” by O’Rowe,  Tennessee William’s  “The Big Game” and just finished directing George Bernard Shaw’s “The Fatal Gazogene” at the Campbell House Museum.  Brenhan has also directed his adaptation of one of the Japanese Rashamon Tales which he named “In the Pines” as it was set in Ontario in the 1800’s.  Brenhan has acted in several indie films, one of which, “The Agent” appeared  for several weeks on an American television channel.

Our daughter, Alanna McKibbon, would rather be behind the camera than in front of it .  She was in drama classes in high school and took part in a production of “The Effect of Gamma Rays on Man in the Moon Marigolds” among other things, but is more interested in film than theatre.  She graduated from The Film and Television course at Humber College and has been using her craft ever since, most recently as assistant editor on a television series.

Our other children, Sean and Dan also enjoy theatre and film.  Sean took part in some of the Fencepost Player productions, while Dan helped out behind the scenes.  They are involved now in other art forms but take an avid interest in their brother’s and sister’s careers.

This might be as far as it goes, but I know that our two granddaughters enjoy making up puppet shows and our grandson likes break dancing, so perhaps not.  I don’t know how far back this love for performance goes, but it seems that for this family, our motto should probably be “the show must go on.”

How about your children?  Have you seen certain passions handed down in your family  from generation to generation- perhaps for science or history or sports?  Isn’t it fun to see how certain traits are passed on?  Is it nurture or nature?  When you consider the amazing athletic and artistic feats we have witnessed this past two weeks in gymnastics, track and field and swimming at the Olympic Games, you have to wonder.