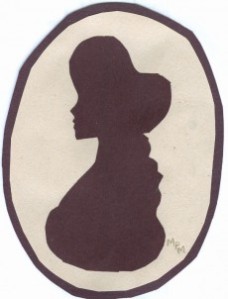 A fictional account of a young woman’s experiences in Upper Canada during the war of 1812.

Our little cold cellar is so full of vegetables now, I doubt I could hide even one child in there.  It has been an extraordinary year for root vegetables and mother is exhausted from making jams and pickled vegetables.  Evvy and I are tired of picking them.  Father and William have been busy bringing in the grain harvest and our corn crib is well filled.

There has been no sign of Bourke thank goodness, but Father has set Henry on guard whenever Mother and Evvy have to help in the fields.  White Wolf followed Bourke’s tracks to the place where Bourke and the O’Meara’s crossed over to Ogdensburg  so he has eluded capture once again by crossing the river.

Father and I were summoned to Fort Wellington yesterday and so I went with my babes bundled up.  I didn’t know what to expect as we were led to believe that the message engraved on the cabin door had exonerated me from all suspicion in the death of Charles.  The fort is still under construction so there was the constant sounds of sawing and hammering while we were there.  There is also great preparation for winter going on and many of the men who live outside the stockade have been making their shacks more winter-proof as they know now how cold a Canadian winter can be.  The woodpile is stacked high within the stockade and army wives are keeping busy knitting warm socks, hats and mitts for the men as I have for my boys.

While at the fort, I received a most alarming shock.  At first I heard his voice and turned my head to see a slightly shorter version of my dear Charles.  He was standing by the window of the commander’s office talking to some of the soldiers outside and his voice was eerily like his brother’s.  They were discussing a recent report of the activities of Major-General Ross and Rear-Admiral Cockburn who had taken a small force and attacked a much larger American force which they defeated.  Evidently, Charles‘ older brother, whom I deduced this almost double was, had been in the force that had taken Washington and burned several buildings there, one of which was the presidential residence.

“It was quite astonishing, really,” I heard him say, “the table was all set for a diplomatic banquet and so we felt quite touched that Mrs. Dolly Madison had prepared such a pleasant feast for our enjoyment.”

The men outside guffawed quite heartily at the thought of the invading army sitting down to dinner before burning the place.

“Sadly, we were unable to thank our hostess,” he added, “ as she had fled the premises.”

I confess at that moment I greatly sympathized with Mrs. Madison. I too had lost my home and all my possessions to a fire started by my enemy.

There was more genial laughter and at that point the commanding officer entered the room.

Father had pulled up a chair for me and I sat there with Charlie in my arms.  Father was holding Andrew and rocking a bit on his feet.

The Lt. Colonel cleared his throat and the Captain straightened his uniform and saluted.  At that point he suddenly seemed to notice me.  I must admit, I was staring at him.  He looked so much like his brother, although his hair was brown and his mustache was thicker.

The fort’s commander addressed us.

“I have here a letter for your father, Captain, in which I have included a fair copy of Constable Breton’s report in which he completely exonerates Mrs. Houghton of any part in her husband’s murder.  Constable Breton is presently following other lines of inquiry.”

“Lt. General Pearson, I appreciate your attention to this matter,” declared Captain Houghton, “ but having read the report myself,

I rather doubt that my father will be satisfied with the constable’s conclusions.  Some scratchings on a door and a home that has conveniently burned to the ground is hardly proof of innocence.  I would think it is, rather, a feeble attempt concocted to avert suspicion from the true culprit.”

I began to open my mouth when my father leapt to my defence.

“Excuse me Captain,” he said thrusting Andrew into my arms and stepping forward to face Captain Houghton, “are you implying that somehow we set fire to my daughter’s home to convince the constable of her innocence?”

“I am simply stating, sir, that I did not find the report credible.  I do not believe every effort has been made to apprehend Charles’ murderer and I do not believe my father will be any more persuaded than I.”

“ My daughter, Captain Houghton, has been deprived of a husband and a father for her children.  She has been deprived of her home and of any income.  She has made no demands of Charles’ family, other than the respect due her position as his widow.  Her mother and I are now her sole support.  If you dare to think that we have had any part in this tragic situation you lack the intelligence that a gentleman of your education and background should have.”

The captain began to protest and my father interrupted him.

“Thank you for your report, Lt. General Pearson.  My daughter and I will be leaving now and we wish no further communication from the Houghton family of any sort. Good-day.”

And so we left Ft. Wellington, without the intended visit to see Col. Jessup.  Father was too angry to speak as he drove our cart home but he squeezed my hand tightly as we drove back through the dusk.  My heart was pounding and my throat hurt from holding back the tears.