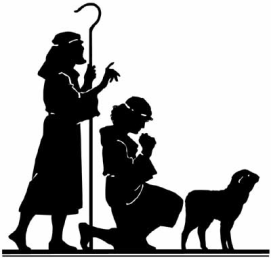 “Grandfather, tell me the story about the  wooly coat.”

Isaac looked fondly down at his little granddaughter and smiled. She was the only one that asked about about that chilly night so long ago.  Everyone else had heard the story so many times that they no longer listened. Everyone but Sara.  He smiled and nodded and she climbed upon his lap to hear it.

“It was so many years ago,” Isaac began, “when I was just a little bit older than you.  My brothers were tending sheep in the hills.  Every day I tried to follow them up with the sheep.  Every time they would get as far as the brook and then one of them would turn around and tell me to go home.”

“Why did they do that, Grandfather?  Why were they so mean?”

Isaac chuckled, “Oh Sara, they weren’t being mean.  They knew that I couldn’t keep up to them and that could be dangerous if I lagged too far behind. But, one day I was able to keep up to the flock.  “

“That was the night, Sara.  I remember it was very cold and Caleb gave me his wooly coat to wrap up in.  It had been a long day and I had done a lot of climbing.  I curled up by the fire and fell asleep.”

“Then Caleb started shaking you and calling, ‘Isaac , Isaac, O Isaac the star’!”

“Yes, he woke me up shouting about the star,” said Isaac.  “ I sat up with a shiver and there was light all around us and such beautiful singing, Sara, such glorious singing!”

“And the sky was filled with angels, “ continued Sara, her eyes shining into her grandfather’s. “Were you frightened?”

“Oh yes, at first we were all frightened, but the angels spoke to us in such soft voices that we just listened and listened.  The music was so sweet it almost hurt our ears.”

“What did the angels say?”  Sara knew but this was her favourite part.

“The angels told us not to be afraid, that a special baby was born in Bethlehem, a king, and that we should go and see him.”

“Did you go, Grandfather, “ asked Sara smiling.  She knew what came next.

“Yes, I went, Sara, but I couldn’t walk as quickly as my brothers and soon, I was far behind. I began to run, but I stumbled and hurt myself.  Caleb heard me cry and he came back to get me.  He put me up on his shoulders like this, “ Isaac paused to put Sara up on his old shoulders.   Sara giggled and then Isaac sat her back down beside him.

“We walked into the town and tried to find the others.  It was very dark except where the star shone.  We followed the starlight to a stable.”

“Were your brothers there at the stable?  Was it a real stable with cows in it?”

Isaac looked down at his granddaughter.

“It was a real stable, and there were cows there, but in their manger …..”

“In the manger was a tiny little baby,” whispered Sara.

“His hair was shining, his face was shining and he looked right up at me.”

“And what did you do then, Grandfather?” asked Sara.

“And did she put it around the baby?” asked Sara.

“Yes, she wrapped Caleb’s wooly coat around the baby and he smiled.”

“Did you walk back up into the hills?  Weren’t you cold without the coat?”

“We walked back up to the hills and our sheep, but I wasn’t cold and Caleb didn’t mind about his coat being left for the baby.”

“Did you tell other people, Grandfather?”

Isaac didn’t answer for a moment, but then he finally said, “Yes Sara, my love, I’d telling you.”

“Did you ever see your brother’s coat again, Grandfather?”

“Many years later, I took your father to listen to a great teacher speaking on a hillside not far from here.  Everyone was talking about how intersting his stories were and how he could heal people’s illnesses.  There were many, many people listening to everything he said.  They were all around him, but we got up as close to him as we could,” said Isaac.

“He was very kind and the children crowded around him too.  Some people wanted the children to go away, but he told them to come closer.  So we did too. “

“And what was the teacher sitting on, Grandfather?” laughed Sara, putting her hands around her grandfather’s neck.