I’ve been playing with felt again.  This time I made a felt pizza that my grandson can take apart to serve or put on the platter together to bake.  This play pizza is stuffed with fill and is covered with tomatoes, olives, pepperoni pieces, green pepper and mushrooms.  It attaches to the plastic platter (Dollar Store) with velcro.  At first I tried to sew on the fuzzy part of the velcro to the pizza, but after two broken needles, I realized that I only needed the toothy part attached to the platter as the felt just naturally attached to it.  So here it is: 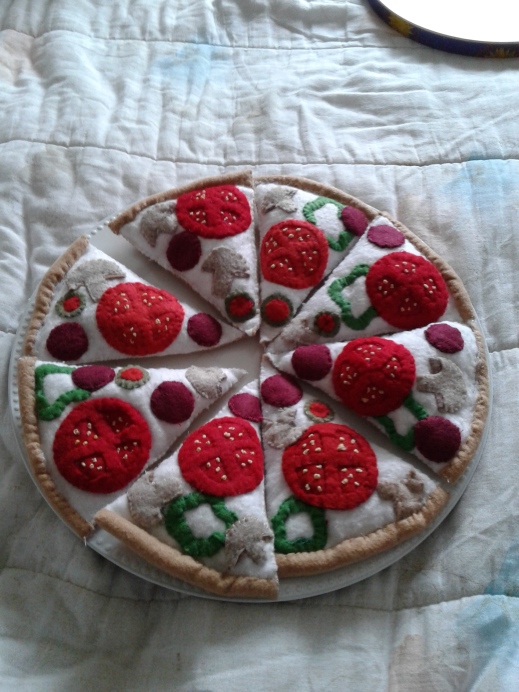 Then I decided to make three hotdogs and buns for more fun food.  The hot dogs were easy – just three tubes of brown felt.  I decided to add the toppings before sewing, so while I completed the pizza, I called upon my sous-chef (my 10 year old granddaughter) to cut out the mustard, catsup and relish which she did with great skill.  I sewed them on and when I sewed up the seams, she stuffed them.   The buns were a bit more of a challenge, but in the end I think they looked enough like bun to please my grandson (he’s two).

Next I made eggs and bacon strips.  I think they look convincing.

These felt foods were intended for my grandson’s 2nd birthday present and he was very pleased with them.  I think he will like cooking them on his felt play oven.  Oh, I do love felt.  My sous-chef approved also.  Thank you, Kaytlyn.